As you may know in my past blog, my bike was stolen and I’ve been looking for it for about two months. I’ve almost given up finding it because it’s been really inconvenient since it disappeared, and I was getting tired of looking around and checking up similar bikes every time I go out. Also, people say it’s almost impossible to get stolen bikes back, and even though I found it, it might be broken. Kindly, they shared some of their experiences of their bikes being stolen in the past. They partially discouraged my will to find my bike and catch the thief. Actually, I stopped by some bicycle stores to check out some cool, new bikes. They were fascinating. But I couldn’t make up my mind, thinking that my poor buddy was somewhere near here waiting to be found in the darkness… And, thinking that I really, really wanted to catch the bike thief. Of course, the bike theft is a crime. There’s no doubt about it. The problem was that my commuting cost was increasing and it was almost time to buy a new one. It was one such day, I received a letter. It was from the local safety division of Fuchu-shi, saying that they had my stolen bike in custody at their Yahata-cho facility, so bring your ID and take it away within 60 days from this notification. What!? My stolen bike was found? Really? I wasn’t for sure if it was my bike or not, but I rushed to the facility and found…. MY BIKE!!! Yeah! We reunited! It’s incredible.

The real story was that, after the bike thief stole my bike, he/she left it on the street near the Fuchu Station of Keio Line. A city official of the safety division found it and removed from the street, and put it in custody at the Yahata-cho facility. They waited for the bike owner to come and pick up the bike. But nobody came. After several days, they checked the serial number and the anti-theft registration number of the bike, and found in their database that it was a stolen bike. Then, they contacted me.

So, it looks like the bike thief stole my bike just for his/her convenience. He/She maybe wasn’t looking for a bike intentionally at that time, but he/she found a unlocked bike and might steal it without any sense of guilt.

In any case, it is a crime. 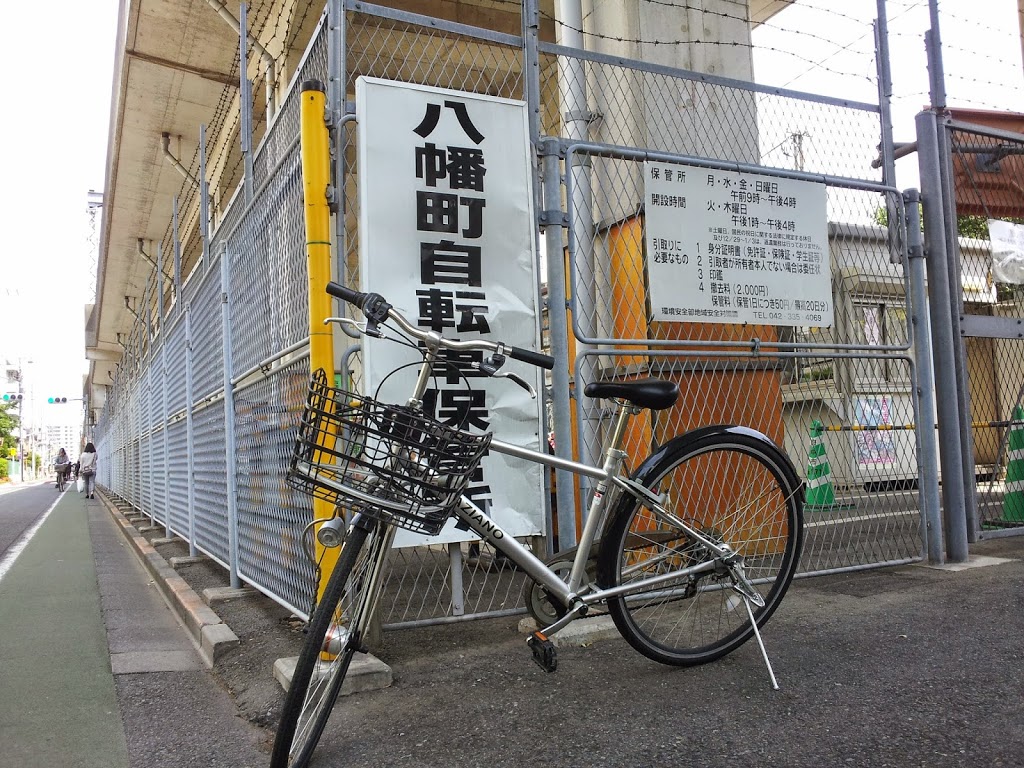 My bike kept at the Yahata-cho facility

I’m happy that I could get my buddy back now.  Everything is back in normal now. But one thing is different, which is my body got fat during the train commuting. I need exercise to lose some weight.
THANK YOU!

Thanks to everyone who helped me finding my bike. It was a nice experience for me and I hope all the best for all my friends whose bike is stolen.
I think everyone’s thinking has attracted the atmosphere for my bike to be found. The positive result will come if we think it very seriously. This maybe called “Law of attraction.”
Never give up!
Your dreams will come true! 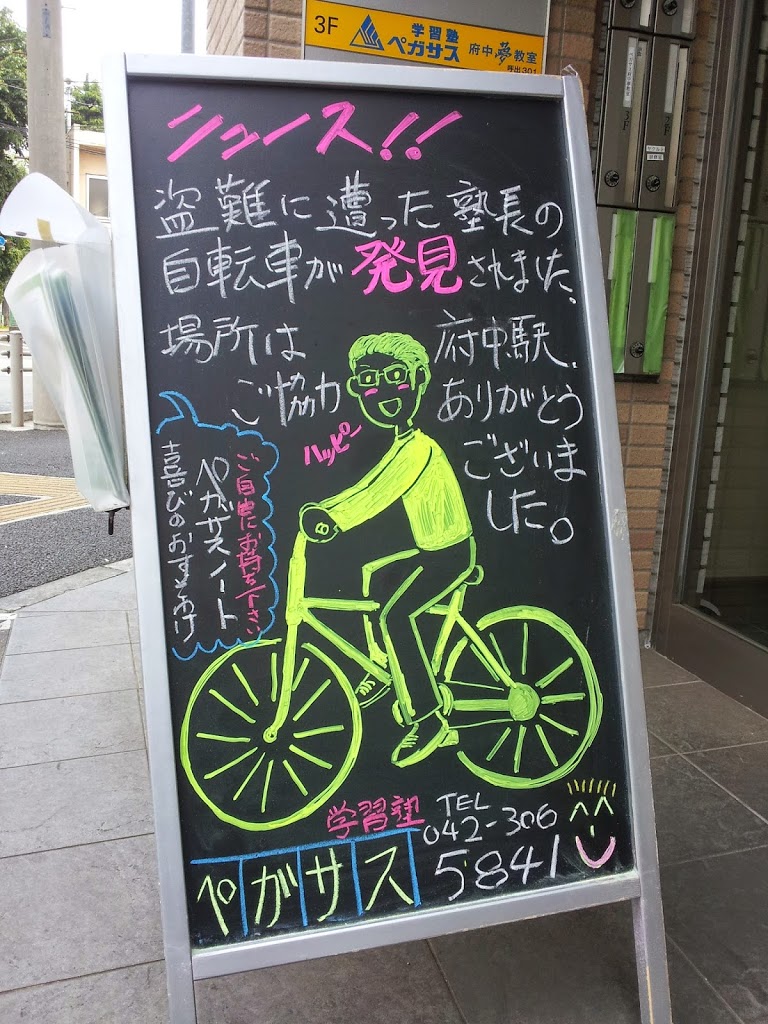 A thank-you board in front of the school
◆◆◆◆◆◆◆◆◆◆◆◆◆◆◆◆◆◆◆◆◆◆
◆◆◆◆ Where there’s a dream, ◆◆◆◆
◆◆◆◆◆◆◆ there’s a way. ◆◆◆◆◆◆
◆◆◆◆ From Fuchu, Aim to be ◆◆◆
◆◆◆ the best in the world! ◆◆◆
The Pegasus’s Dream School
◆ in Fuchu supports ◆
◆ the children’s ◆
◆ dream. ◆
◆◆◆◆◆
◆◆◆
◆◆
◆
Pegasus’s School of Dream in Fuchu is a private school with professional tutorial classes for 32 years intended for elementary school and junior high school students
The school is located in the 3rd floor of the Hokushin Building located diagonally across from the Mama Pasta Italian Restaurant along the Route 20.
The area: Fuchu-shi, East side of Fuchu (Shiraitodai, Momijigaoka, Wakamatsu-cho, Sengen-cho, Tama-cho, Asahi-cho, Shimizugaoka, Koremasa, Koyanagi-cho, Oshitate-cho)
● 5 minute walk from Tamareien station of Keio Line
● 8 minute walk from Shiraitodai station of Seibu-Tamagawa Line
● 14 minutes walk from Tama station of Seibu-Tamagawa Line
● 11 minute walk from Higashi-Fuchu station of Keio Line
● 12 minute walk from Musashinodai station of Keio Line
TEL 042-306-5841
FAX 042-306-5842
1-41-1 Hokushin Bldg 3F
Shiraitodai, Fuchu, Tokyo 183-0011, Japan
Facebook page of Pegasus’s Dream School in Fuchu
Home page of Pegasus’s School of Dream in Fuchu 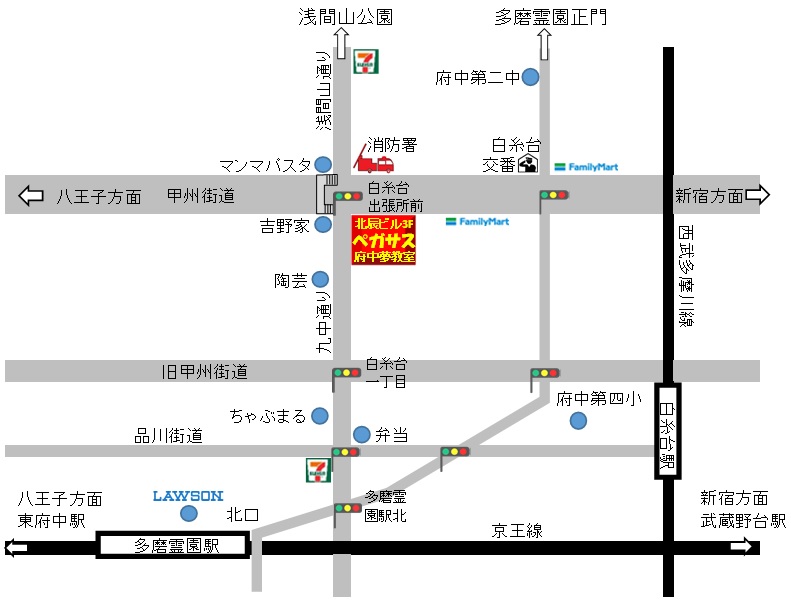